Boarding schools aren’t on most parents’ radar because of one seemingly obvious barrier: the fees are unaffordable. In 2020, the average boarding fee per term for pupils at ISC schools was £11,609 – multiply that by three terms and you’ve almost made a £35,000 dent in your bank balance each year. But did you know that a boarding school education is not the preserve of the top one percent and their kids?

There’s a far cheaper option that allows your family to benefit from this unique education opportunity: state boarding schools. These institutions have experienced a surge in popularity in recent years, for two compelling reasons: the fees are typically somewhere between £10,000-£18,000 a year, with parents only charged for accommodation costs because tuition is government-funded; and they help families to manage busy professional lives that are defined by long hours and international travel.

While there aren’t any state boarding schools in London itself, there’s a handful dotted around the home counties that surround the UK capital, including:

CRGS has a rich heritage that dates to the 16th century: originally founded in 1206, it was granted two Royal Charters: by Henry VIII in 1539 and by Elizabeth I in 1584. It became an academy in 2012, before being designated a National Teaching School and a National Support School in 2013. CRGS admits boys aged 11 to 19 and girls into a co-educational Sixth Form. Its family-style boarding house is designed for 30 Sixth Form students, which contributes to the school’s family feel.

This co-educational boarding grammar school is rated ‘Outstanding’ by Ofsted. Founded in 1518 and given its royal charter by Elizabeth I in 1574, it has evolved into a wonderfully modern education institution. Today, students benefit from the breadth of the school’s curriculum and its emphasis on growing character as much as minds. Cranbrook strikes a perfect balance between the traditional academic curriculum and a busy co-curriculum of competitive sport, music, drama, CCF, DofE and student-led societies.

This non-selective state boarding school was established in 1885 at the behest of Queen Victoria. Situated in 50-acres of stunning grounds with first-class facilities, the school strives to offer a first-class education and produce well-rounded students that are prepared for life after school. Impressively, Gordon’s is officially listed as one of Britain’s outstanding schools by Her Majesty’s Chief Inspector.

Hockerill Anglo-European College is a state co-educational day and boarding school for students aged 11 to 18. The college prides itself on providing students with a dynamic, vibrant, and exciting learning environment. A broad curriculum is complemented by Hockerill’s status as one of the largest state schools offering the prestigious International Baccalaureate Middle Years and Diploma programmes – with a particular focus on languages and music.

Get help from the experts

Relocation specialists Simply London can help you conduct a comprehensive state secondary school search, before assisting you with the application process. You can schedule a call with one of our Experts here to discuss how we might be able to assist. 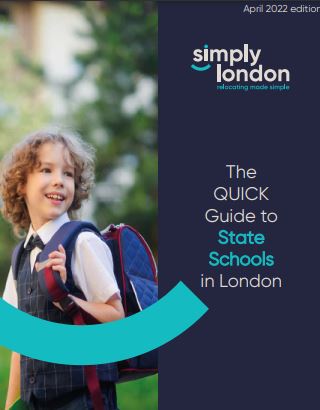