British schools features, without the clichés!

As you would have guessed, educational systems vary from one country to another.

From abroad, the British schools can be perceived as being very traditional, with Harry Potter uniforms in mind and gothic school buildings nestled in the middle of a green country side but what about their real features?

British schools features, without the clichés!

To get rid of the clichés, we explain their typical characteristics.

Yes, I will agree with you, uniform is not a cliché and is worn by the clear majority of pupils.

Wearing a uniform is a badge of pride, creates an identity for a school, and is an important part of being a school student. And because there is no difference in clothing inside a class, there will be less comments and bullying about the way children dress. Needless to say, mornings are much easier to manage for parents and children alike!

A school motto is a phrase that summarizes an educational institute’s values and priorities. It is traditionally accompanied by a coat of arms. Every independent school has a school motto.

Often in Latin for the most prestigious ones, such as “Floreat Etona” (May Eton flourish) for the world famous Eton school, nowadays, the mottos are more likely to be written in English and are adopted by the State schools as well, for example a nice one is “Learning to love, loving to learn”.

A lot of schools specialise either in education for boys or girls. The activities offered by these schools will be different. For example, girls will traditionally be doing Netball, Hockey and swimming; for boys, cricket, rugby and football are traditionally offered.

The clear majority of state schools is co-educational. Boys schools and Girls schools tend to be found in the independent (private) system.

4. School days can be short

In Primary, the typical day would start at 8.45 am and end at 3.30 pm. Consequently, it leaves plenty of time for extracurricular activities and homework. For working families this means as well that they have to find the right after-school childcare. 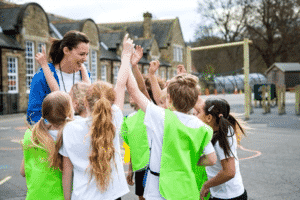 Every school, either in state or independent system, offers a broad choice of after school activities, from 3.30 pm to 4.30 pm.

Chess, flamenco, Spanish course, football, coding…. the list can be huge and your children will always find something exciting that they like. Important: these activities are extras and are not included in the school fees.

Another good point for the parents’ preparation is all the books are provided by the schools.

In primary level they often don’t even need a pencil case as they will find everything they need in their classroom.

7. Unlikely to repeat a school year

A lot of our clients ask us if their children would repeat a year when coming into the British system because of the English level of their children. In Primary state system, each class is multi-level organised.

That means that your child will be placed in a group accordingly to his level. He/she won’t have to repeat a year and will then be making progress throughout the years. It will be different for the selective schools where the admission will be refused if your child does not have the requested entry level.

The first year of school is called Reception and your child will join their class if he/she turns five between 1st September and 31st August. This means that children can start school as young as 4 years old and secondly, all the children of the class won’t have the same birth year.

9. Pupils are encouraged to express themselves in public and confront their opinions

One of the good things in the British system is that children will be encouraged from a young age to come in front of their peers to tell stories and express their ideas.

At primary level, it can be made through the weekly assemblies, where children recite poems and tales. The “Star of the week” will stand in front of the whole school to receive greetings. In addition, a popular activity is “show and tell”: a child will bring a belonging and should explain the class why it is special to him.